Transparent smartphones have always been more of a concept than a reality, however in recent years these concepts have become more of a reality. Starting with the Xperia Pureness which was released in 2009 a feature phone with a transparent monochrome screen. Since then other manufacturers have developed colour transparent screens and now they are in the progress of integrating the techonology into modern type smartphones with touchscreens.

Polytron Technologies based in Taiwan have developed a multitouch display using a conductive OLED which is able to form text and pictures when activated with an electric current that flows though transparent wires, when the display is off it disperses into cloudy liquid crystal molecules creating a transparent screen, molecules can then realign on demand to form text and icons. The prototype developed is said to use Switchable Glass technology, which makes sense considering the way the screen reacts. 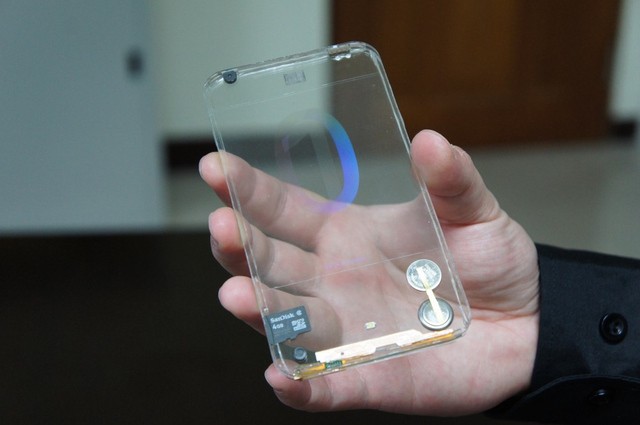 The technology is still in the development stage and doen’t run any software, however they are marketing their research toward smartphone manufactures and hope to bring it to consumers before the end of 2013. On the other hand modern displays have become bigger and increasingly sharper, therefore these transparent displays would have a high bar to reach in terms of quality, which is of the upmost importance.