Apple haven’t been particularly secretive about their latest projects. Two iPhones have been announced today as were last year with the 5c and 5s, however this year the only major differences are the screen sizes. The iPhone 6 and 6 Plus, both are powered by a new 20nm A8 chip at 1.4Ghz with 1GB RAM, the 6 has a 4.7″ screen with a 750 x 1,334 resolution, whilst the 6 Plus has a 5.5″ screen with a standard 1080p HD screen, both are branded under Apples Retina marketing term. 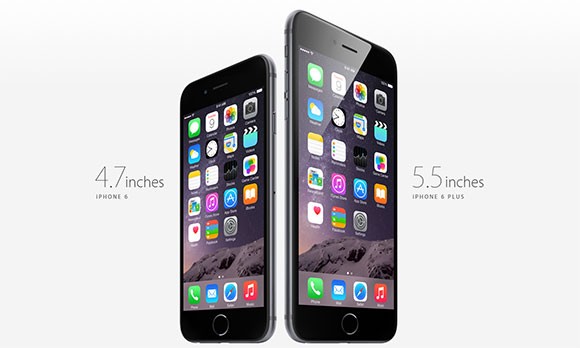 Apple have finally added NFC to their devices, which should tie in nicely with their ‘Apple Pay‘ app should you be able to find a retailer that accepts such payments, here’s to hoping that that it will become more popular now that apple have joined the likes of others such as Samsung and Google who also have their own contactless payment solutions.

The 6 Plus is the more premium device not only for the larger screen, it also sports OIS (Optical Image Stabilisation) which helps reduce camera shake for better photos, optimised apps which utilise the extra screen space and a longer battery life despite the larger display. Apple have finally cought up with what has become standard size in the mobile industry with iPhone 6, whilst the 6 Plus is there to compete with the ‘Phablets‘ a term originally coined by Samsung.

‘Apple Watch’ is the accessory for the wrist of which it’s primary focus is on health and fitness, akin to many of the Nike wearables, however with the added functionality of a smartwatch. It comes in three different models and customisable straps which can be easily changed.

iOS 8 will also allow route access to system files for developers, this will allow for third party apps to run in the background in a fashion that was previously only possible for native applications, for example – third party alarm clocks will still work once exited, custom keyboards can be set and there will be better integration with other cloud services.