The media has a huge influence on society. Zed Nelson’s project ‘Love Me’ portrays a reflection on the cultural and commercialised views and todays fixation on youth and beauty. It features graphic images of the details of plastic surgery and shots of beauty pageant contestants.

When asked about the project Nelson says “I’m sure that was no coincidence. Like many of my long-term fascinations, I don’t know exactly when the idea seeded itself. Perhaps it began quite simply, one day, when I looked in the mirror and realised I would not live forever…The age you realise that the body you inhabit has been loaned to you, that it is not fully yours, not fully under your control. I realised too that the way I perceived myself was increasingly being influenced by others.”

Nelson’s work exploits the dark and unseen side to the beauty industry. It captures the extreme lengths of pain and danger that a person would endure to fit in with generic idea of what is ‘beautiful’.

The child shown in the image is Kristen O’Connell. She is a thirteen ear old girl that is at Camp Shane in New York. Camp Shane is a fat loss camp for children. The caption of the image is “I’ve been here 10 days and lost 8lbs so far”. Nelson has included this image in his project as it is a clear representation of how our society has been brainwashed into believing what is and isn’t considered as beautiful. This picture shows a very young girl who wants to change her body. Nelson is illustrating how very young children are being influenced by what they see in the media.

I think that children should be educated about the dangers of the media in relation to body image. This could prevent numerous issues that are surfacing today such as body disorders and low self-confidence issues. This education and awareness could change society’s whole outlook of beauty. 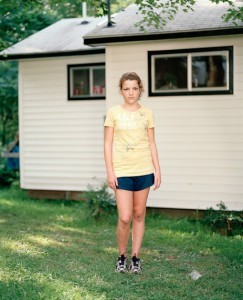