Here’s some news that might come as a bit of a shock to many of those Nintendo fans. A Pokedex app has been submitted to the Apple App store, okay so its not something everyone is going to get excited about, however until now Nintendo has ignored the App store for release of any software or games. It’s given that many other third party developers have released unofficial Pokedex apps, so Nintendo may have decided to release their own official app. However imagine if this becomes a success, in the future Nintendo could release classic games such as the original Mario or Zelda on iOS.

The app is currently only available in Japan for around £1.30, with downloadable add-ons for new Pokemon. Further availability is yet to be confirmed outside Japan. This move shows how Apple is becoming more dominant in the gaming industry. Similarly Sony had recently made their music library available via iTunes in Japan. With such companies as Sony and Nintendo which were once leading the entertainment industry, now giving into making their products and services available to Apple customers, it’s quite possible that we will see a shift in how we purchase and consume these in the future. 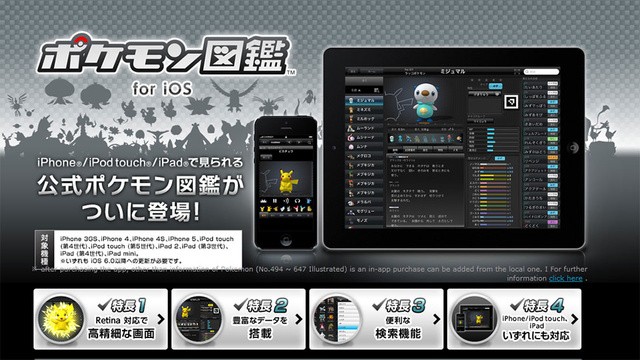 Sony have more of an immediate concern where Apple have already taken a large chunk of their portable media and entertainment market. Whilst both companies have cause for concern as mobile gaming becomes more mainstream, with better quality games and more powerful hardware producing console like graphics.