Recently there has been much media coverage on the new Jurassic World trailer reaching thousands of people in it’s first 24hrs. Capturing the imagination of many people where it created a believable theme park environment where dinosaurs could live.

Of course the reality of the trailer is quite different, dinosaur DNA is quite old, over 65 millions years, mammoths on the other hand have been dated to be around 10 thousand years, with the best preserved one being around 28,000 years. We have access to mammoth fossils, hair, protein and even blood, however the DNA is very fragmented and shattered from the thousands of years in ice. There is still hope that  a full piece of DNA might be found or else that piecing together parts from different samples to create a complete genome might be possible. 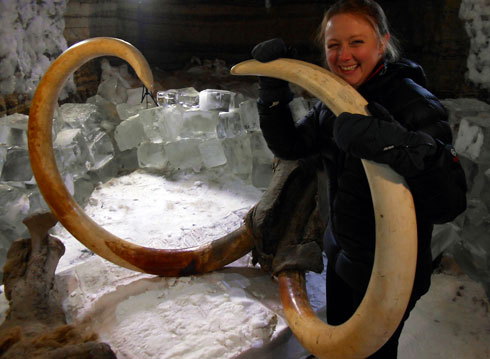 The other possibility would be to edit the DNA of the mammoths closest living relative, the Asian elephant, the DNA is around 99% the same, therefore you could just insert the mammoth DNA wherever there might be differences. Moreover scientist might then say you would then just have a genetically engineered elephant and they wouldn’t be able to show how an actual mammoth would have behaved being since they would have been kept in captivity and to create a natural habitat would prove very difficult, especially as many other species struggle to keep away from extinction themselves.

De-extinction of other more manageable animals such as the North American passenger pigeon is another contender, with plans to train them with homing pigeons and create aviaries for them to live. Oliver Ryder the director of genetics at the San Diego Zoo Institute for Conservation Research, hopes the Frozen Zoo, a “bio bank” that contains frozen tissue including preserved sex cells, embryos and cell cultures from more than 1,000 different species, will help to preserve the DNA of critically endangered animals such as the northern white rhinoceros.

The De-extinction of species has various technological limitations at present. Whereas species such as the European beaver, bison, lynx, wolf and wild boar had previously been native to the United Kingdom, before excessive hunting and the loss of their habitat. These animals still exist in the wild, albeit in other countries, the plausibility of their re-introduction depends upon social and ecological, rather than technical, factors.