Nintendo as a company have always found new and inovative ways for people to play, especially in recent years, they have contibuted largely to getting families together with the Nintendo Wii with its simplistic controls enabling people of all ages to join in the fun. Before the Wii Ninendo had gone through a bit of a strugle with  the GameCube that failed to achieve the success of their previous consoles. Up until 2004 Nintendo had dominated the protable gaming industry with the GameBoy series before releasing the DS which itself and its successors are currently the best selling portable gaming consoles in recent years. However with the increasing gaming capabilities of mobile devices such as phones and tablets which have far greater processin power and more powerful graphics chips than any of the portable Nintendo consoles there appears to be an ongoing threat to the portable console.

There have been many rumors and much speculation about Nintendo having plans to develop games for other mobile devices, on one hand this could benefit Nintendo as a source of easy income as virtually everyone has a mobile device. The mobile app industry is worth billions and is still growing. However Nintendo clearly make their games as exclusives for their own consoles and everytime Mario Kart / Platformer, Zelda or Pokemon game are released there is often an increase in sales of their consoles, therefore they’re not particulary inclined to make games for other platforms, you don’t see Sony or Microsoft releasing their exclusive content either. 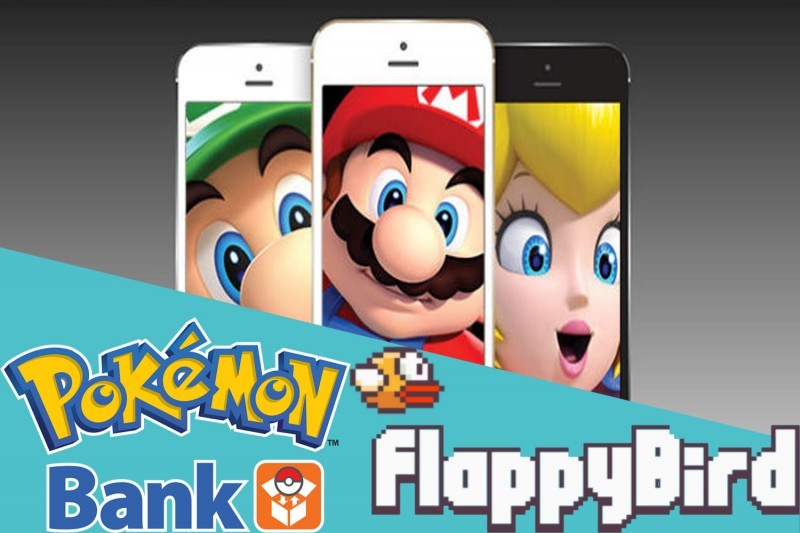 Perhaps one of the most successful mobile games which draws inspiration with its design elements and 8bit sound from Nintendo platformers is Fappy Bird, the simplistic gameplay can addictive and geared toward being very competetive amongst others when trying to beat high scores. There have been many emulators, non official releases of games from previous generations of various consoles and many of the games released on mobile app stores are often hacked and therefore forced to go free with adds. There are many issues such as these which haunt the companies which are dependent on the success of their games.

Pokemon Bank has seen its second global release today after the Nintendo servers were unable to support the large number of users which downloaded the app upon it’s original release last year, it is an application which allows players to organise up to 3,000 of their Pokemon and has a companion app (Poke Transporter) for tranfering critters from previous games should you have a second DS console. It could be possible that such companion apps could be made available on other mobile stores as currently there have been many third party alternatives such as Pokedex and strategy guides.